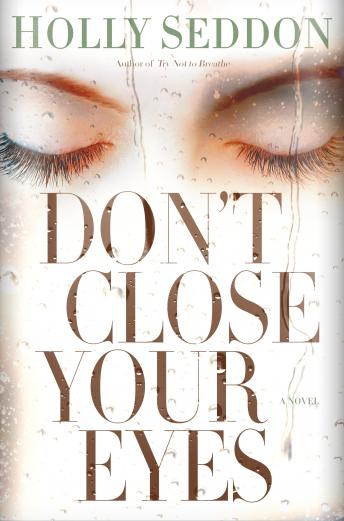 Don't Close Your Eyes: A Novel

A juicy, powerful read featuring twin sisters who have drifted apart, and the shocking family secrets that bind them—for readers of The Woman in Cabin 10 and I Let You Go

When the past knocks, someone must answer.

In a bustling suburban neighborhood in Manchester, England, sits an unassuming house. There is no sign of life behind the unwashed windows, but Robin Marshall is inside. Driven by fears and obsessions, racked by anxiety, Robin is frantically pushing her body through punishing workouts, eating little, haunted by what happened to her family when she was a girl. Robin’s only connection to the outside world is through her rear windows and the lives she spies upon in the apartment house across the way. Then a stranger starts pounding on her door.

Sarah Marshall is Robin’s twin, estranged from her sister after their parents’ betrayal and a violation at the hands of a man she should have been able to trust. Sarah has recently lost custody of the child she loves more than anything and has set off on her own, hoping that somewhere in England she can find Robin, the braver twin, the rock star, the survivor, the savior.

These two young women, polar opposites, cannot go on unless they reckon with the past. While Sarah, slowly unraveling, searches for her sister’s hiding place, Robin sees another life hanging in the balance in the lighted windows across the street. It is a life only Robin can save—as long as she never looks away.

In a novel that is stunning in its twists, shocks, and gripping psychological suspense, two sisters find themselves on the razor’s edge of sanity. Untold secrets, a ghastly lie, and suffocating guilt hold them back. Only one astounding act can set them free. And one last revelation will leave readers gasping in surprise.

Praise for Don’t Close Your Eyes

Praise for Holly Seddon’s Try Not to Breathe

“A razor-sharp, fast-paced plot and wonderfully complex characters . . . Not since The Girl on the Train have I been so captivated by a work of suspense.”—Tess Gerritsen, New York Times bestselling author of I Know a Secret

“Delivers the high-quality thrills and intriguing characters that readers demand in the best of psychological thrillers.”—Associated Press

“A fast-paced debut about long-buried secrets and tangled truths.”—Kimberly McCreight, New York Times bestselling author of Where They Found Her

“Try not to breathe, try not to make plans, try not to commit to anything in fact till you have finished [Holly Seddon’s] debut novel, because we must warn you now—you’ll be fully hooked from page one.”—Glamour (U.K.)

“Fascinating . . . Seddon’s storytelling skills are strong and the book is engrossing.”—Kirkus Reviews

“This gripping thriller about family and redemption will keep readers engaged to the very end.”—Publishers Weekly

Don't Close Your Eyes: A Novel