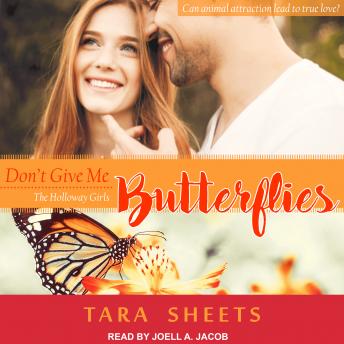 Don't Give Me Butterflies

Narrated By: Joell A. Jacob

As the Queen of Impulsive Decisions, Kat Davenport has found herself without a job or a place to live. So settling on Pine Cove Island isn't the sanest choice-meaning it's perfect. Like the mysterious Holloway cousins, Kat has her own unique gift. In her case, it's a knack for communicating with animals. Which makes getting hired at the local animal shelter feel like kismet. Especially when she finds a room to rent at a nearby lavender farm-complete with a sweet landlord and her brawny grandson-a guy who happens to give Kat an all-too-familiar flutter in her stomach . . .

Jordan Prescott isn't back in Pine Cove to find romance. He's here to sell the family farm, a fact that bewilders Kat. A former foster kid, she can't understand why he'd give up his childhood home. So when the big-hearted beauty starts bringing home strays from the shelter, Jordan is suddenly her adversary. Until their fiery disagreements turn into fiery kisses . . .

Now Kat is falling for a man who will likely make her homeless yet again. Unless she learns how to lend her considerable powers to taming the beast lurking inside this prince . . .

Don't Give Me Butterflies