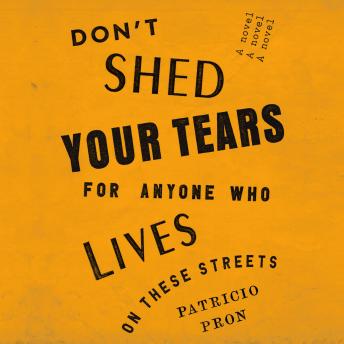 Don't Shed Your Tears for Anyone Who Lives on These Streets: A novel

From the acclaimed Argentine writer, one of Granta's Best Young Spanish-Language Novelists: a bold, ambitious new novel about how art became politics and politics became crime during the cataclysm of the Second World War.

Pinerolo, Italy; April 1945. At a conference in support of Fascism, a writer disappears and is found dead at the bottom of a cliff. Thirty years later, a young man--a political activist or a terrorist, depending on your perspective--interviews survivors from the conference, to try to uncover the truth about what happened and its consequences. Who was the writer? What did he believe in? Why, shortly before his death, did he save a man who could have killed him? Where is his lost work? And what does any of this have to do with a teenager in contemporary Milan involved in a violent confrontation with the police? Don't Shed Your Tears for Anyone Who Lives on These Streets is a razor-sharp, completely original exploration of our most timeless concerns--guilt, betrayal, the legacy of earlier generations--and probes the question of what literature is: how it explains our times and irrevocably changes our lives.

Don't Shed Your Tears for Anyone Who Lives on These Streets: A novel