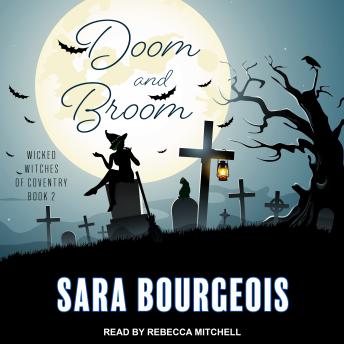 #2 of Wicked Witches of Coventry

When Brighton Longfield discovers her treasured protection amulet is missing, she finds a note in its place from Langoria Skeenbauer telling her that Tuttlesmiths are not welcome in Coventry.

Brighton confronts the woman in the town square with a crowd of Coventry's residents watching. Of course, Langoria Skeenbauer is one of the town's most upstanding citizens, so people assume she's innocent and Brighton is nuts. When Langoria is found dead in the cemetery across from Hangman's House, Brighton becomes a suspect.

Brighton is the one who discovers the body, and even Thorn is suspicious. But Brighton's not the only one in town who wanted Langoria dead-while Langoria was seen as a model citizen by many, she'd actually been cruel to many of the witches in Coventry who don't bear the Skeenbauer name. There are quite a few human residents who aren't a big fan either. To clear her name, Brighton's going to need to sweep away all of the lies and misunderstandings that surround the suspicious death.

With her best friend Annika and her familiar Meri on her side, she's prepared to do whatever it takes to catch the real murderer. She's desperate to clear her name and fix her relationship with Thorn, but will her quest lead her right into a killer's snare?