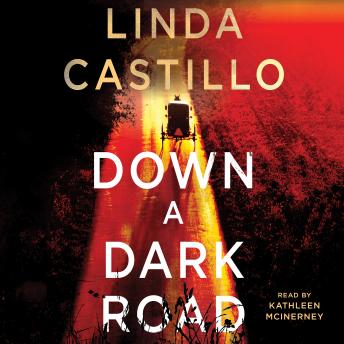 Down a Dark Road: A Kate Burkholder Novel

This program is read by series narrator Kathleen McInerney.

'McInerney's masterly technique makes aural sense of the plain and kind Amish people bewildered by the violence, thuggery, and corruption that have come among them. McInerney's characters are alive, all human and believable, even at a sometimes blistering pace.' - AudioFile Magazine on Among the Wicked

In Down a Dark Road, this electrifying new thriller audiobook in Linda Castillo's New York Times bestselling series, a convicted murderer is on the run and Chief of Police Kate Burkholder must catch him before he strikes again.
Two years ago Joseph King was convicted of murdering his wife and sentenced to life in prison. He was a 'fallen' Amish man and, according to local law enforcement, a known drug user with a violent temper. Now King has escaped, and he's headed for Painters Mill.
News of a murderer on the loose travels like wildfire and putting Chief of Police Kate Burkholder and her team of officers on edge. A nightmare scenario becomes reality when King shows up with a gun and kidnaps his five children from their Amish uncle's house. He's armed and desperate with nothing left to lose.
Fearing for the safety of the children, Kate leaps into action, but her frantic search for a killer leads her into an ambush. When King releases her unharmed, asking her to prove his innocence, she begins to wonder whether the police are hiding something, and she embarks on her own investigation to discover the truth.

Down a Dark Road: A Kate Burkholder Novel