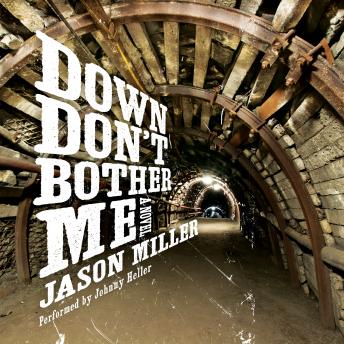 Down Don't Bother Me: A Novel

A hugely entertaining debut—the first novel in a wickedly funny gothic mystery series set in the withering landscape of the southern Illinois coal country known as “little Egypt”—that blends the wry humor of Kevin Wilson, the dark violence of Urban Waite, and the electric atmosphere of Greg Iles.

In the depths of the Knight Hawk, one of the last working collieries in downstate Illinois, the body of a reporter is found, his mini-recorder tied around his neck and a notepad stuffed in his mouth.

The Knight Hawk’s owner, Matthew Luster, isn’t happy. He wants answers—and he doesn’t want the cops or any more press poking into his business. To protect himself and the operation, he turns to Slim, a mine employee with a reputation for “bloodhounding”-finding lost souls when the police can’t or won’t. Luster needs Slim to locate a missing photographer named Beckett, a close associate of the victim . . . who just happens to be his son-in-law.

A hard-working single father barely making ends meet, Slim accepts the job—after Luster offers him a guaranteed pension and job security for life. But when you make a deal with the devil, you’re going to get burned . . . . and now Slim is all too close to the flames. Circumstances have lead him into the grimy underworld of Little Egypt, Illinois—a Babel’s Tower of rednecks, rubes, freaks, tweakers, gun nuts, and aging hippies-and it quickly becomes clear that he’s much more involved in the murder than an innocent man should be.

Down Don’t Bother Me marks the emergence of a wildly assured mystery novelist, and of a series set in the fresh and brutal landscape of southern Illinois.

Down Don't Bother Me: A Novel