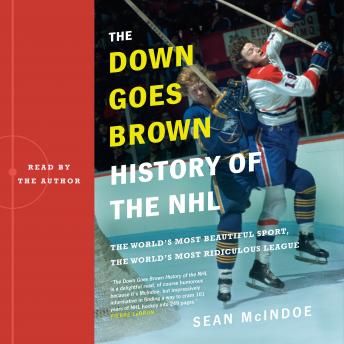 Sean McIndoe of Down Goes Brown, one of hockey's favourite and funniest writers, takes aim at the game's most memorable moments--especially if they're memorable for the wrong reasons--in this warts-and-all history of the NHL.

The NHL is, indisputably, weird. One moment, you're in awe of the speed, skill and intensity that define the sport, shaking your head as a player makes an impossible play, or shatters a longstanding record, or sobs into his first Stanley Cup. The next, everyone's wearing earmuffs, Mr. Rogers has shown up, and guys in yellow raincoats are officiating playoff games while everyone tries to figure out where the league president went. That's just life in the NHL, a league that often can't seem to get out of its own way. No matter how long you've been a hockey fan, you know that sinking feeling that maybe, just maybe, some of the people in charge here don't actually know what they're doing. And at some point, you've probably wondered: Has it always been this way?
The short answer is yes. As for the longer answer, well, that's this book.
In this fun, irreverent and fact-filled history, Sean McIndoe relates the flip side to the National Hockey League's storied past. His obsessively detailed memory combines with his keen sense for the absurdities that make you shake your head at the league and yet fanatically love the game, allowing you to laugh even when your team is the butt of the joke (and as a life-long Leafs fan, McIndoe takes the brunt of some of his own best zingers). The 'Down Goes Brown' History of the NHL is the weird and wonderful league's story told as only Sean McIndoe can.