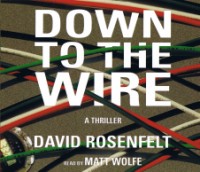 Down to the Wire

A reporter for the Bergen News, Chris Turley could never measure up to his father. Edward Turley, a combination of Bob Woodward and Ernie Pyle, was one of the last great investigative reporters and a difficult man to impress. While stuck covering press conferences and town hall meetings, Chris, his father's legend in mind, has always dreamed of his own Pulitzer, however unlikely it seems. Then one day while he's waiting to meet a source, a giant explosion takes out half of an office building next door. Shocked into action, Chris saves five people from the burning building. His firsthand account in the next day's paper makes him a hero and a celebrity. And that's not all. The source's next tip delivers a second headline-grabber of a story for Chris, and suddenly his career is looking a lot more like his dad's. But then it seems this anonymous source has had a plan for Chris all along, and his luck for being in the right place at the right time is not a coincidence at all. What seemed like a reporter's dream quickly becomes an inescapable nightmare. Down to the Wire, David Rosenfelt's shocking new thriller about an ordinary man who gets exactly what he's always wanted at a price he can never pay, is an intense thrill ride that will have readers racing through the pages right up to the end.

Down to the Wire

This title is due for release on February 16, 2015
We'll send you an email as soon as it is available!