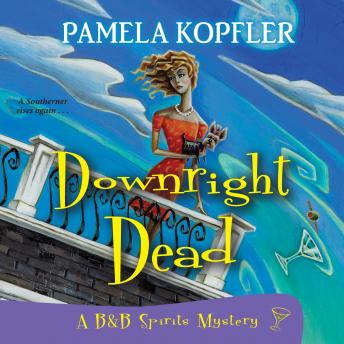 #2 of A B&B Spirits Mystery Book

After the syndicated TV show Inquiring Minds airs footage of their resident ghost at Holly Grove, a converted antebellum plantation house, it seems as if half the state of Louisiana wants to book a room. There’s only one small problem: the ghost of her not-so-dearly-departed husband Burl has...departed. For the sake of business, Holly’s willing to keep up the pretense of still being haunted. But after an outspoken debunker challenges the show’s credibility, the TV crew returns to Holly Grove to prove the ghost is real. Following a disastrous séance, Holly is sure she’ll be exposed as a charlatan. Surprisingly, the debunker suddenly becomes a believer—after he’s pushed off the widow’s walk to his death and rises as a ghost. Now his inquiring mind wants to know: who murdered him? When he asks for Holly’s help, she can’t say no. But this time it’s her turn to watch her step. Because if the killer gets spooked, the next ghost haunting the B&B may well be her own.