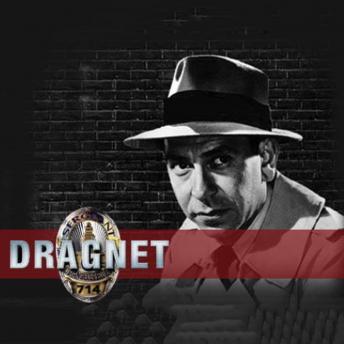 Dragnet, the brainchild of Jack Webb, may very well be the most well-remembered, and the best, radio police drama series. From September, 1949 through February 1957, Dragnet's 30 minute shows, broadcast on NBC, brought to radio true police stories in a low-key, documentary style. The origins of Dragnet can be traced to a semi-documentary film, 'He Walked by Night' from 1948, in which Webb had a small role. Both employed the same Los Angeles Police Department technical adviser, used actual police cases and presented the case in 'just the facts' manner that became a hallmark of Dragnet. It is interesting to note that Webb employed that format in other radio series, some pre-dating the film mentioned above. Dragnet was a long running radio and television police procedural drama, about the cases of a dedicated Los Angeles police detective, Sergeant Joe Friday, and his partners. The show takes its name from an actual police term, a Dragnet, meaning a system of coordinated measures for apprehending criminals or suspects. Dragnet was perhaps the most famous and influential police procedural drama in American media history. The series gave millions of Americans a feel for the boredom and drudgery, as well as the danger and heroism, of real life police work. Dragnet earned praise for improving the public opinion of police officers. Actor and producer Jack Webb's aims in Dragnet were for realism and unpretentious acting. He achieved both goals and Dragnet remains a key influence on subsequent police dramas in many media. The shows cultural impact is demonstrated by the fact that even after five decades, elements of Dragnet are known to those who have never heard nor seen the program. The ominous four note introduction to the brass and tympani theme music, titled Danger Ahead, is instantly recognizable as well as the shows opening narration: 'Ladies and gentlemen, the story you are about to hear is true. Only the names have been changed to protect the innocent.' The original Dragnet starring Jack Webb as Sergeant Joe Friday ran on radio from June 3rd, 1949 to February 26th, 1957; and on television from December 16th, 1951 to August 23rd, 1959, and from January 12th, 1967 to April 16th, 1970. All of these versions ran on NBC. There were two Dragnet feature films, a straight adaptation starring Jack Webb in 1954, and a comedy spoof in 1987. There were also television revivals, without Webb, in 1989 and 2003. Dragnet debuted inauspiciously. The first several months were bumpy, as Webb and company worked out the program's format and eventually became comfortable with their characters. Friday was originally portrayed as more brash and forceful than his later usually relaxed demeanor. Gradually, Friday's deadpanned, fast-talking persona emerged, described by John Dunning as 'a cop's cop: tough, but not hard; conservative, but caring'. Friday's first partner was Sergeant Ben Romero, portrayed by Barton Yarborough, a long time radio actor When Dragnet hit its stride, it became one of radio's top rated shows. Webb insisted on realism in every aspect of the show. The dialogue was clipped, understated, and sparse -- influenced by the hard-boiled school of crime fiction. Scripts were fast moving, but didn't seem rushed. Every aspect of police work was chronicled, step-by-step. From patrols and paperwork, to crime scene investigation, lab work and questioning witnesses or suspects. Webb was a stickler for accurate details, and Dragnet used many authentic touches, such as LAPD's actual radio call sign, KMA-367, and the names of many real department officials, such as Ray Pinker and Lee Jones of the Crime Lab, or Chief of Detectives, Thad Brown. Two announcers were used. Episodes began with announcer George Fennemen intoning the series opening: 'The story you are about to hear is true. Only the names have been changed to protect the innocent.'