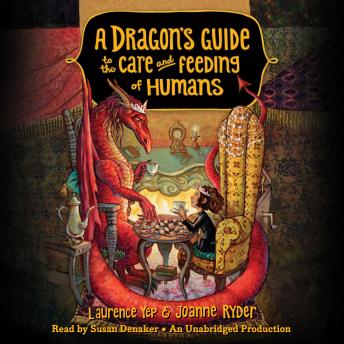 A Dragon's Guide to the Care and Feeding of Humans

Fans of How to Train Your Dragon will love this whimsical tale, the first in a series, by a Newbery Honor winner, featuring charming illustrations and pet 'training tips' in each chapter.

Unknown to most of its inhabitants, the City by the Bay is home to many mysterious and fantastic creatures, hidden beneath the parks, among the clouds, and even in plain sight. And Winnie wants to draw every new creature she encounters: the good, the bad, and the ugly. But Winnie’s sketchbook is not what it seems. Somehow, her sketchlings have been set loose on the city streets! It will take Winnie and Miss Drake’s combined efforts to put an end to the mayhem . . . before it’s too late.

Praise for A Dragon's Guide to the Care and Feeding of Humans
*“Warm humor, magical mishaps, and the main characters’ budding mutual respect and affection combine to give this opener for a planned series a special shine.” –Booklist, Starred

“With a black-and-white spot illustration opening most chapters, an engaging narrator, and a consistently fluid writing style, this title makes a fine dragon choice for readers.” –School Library Journal

“In this series launch, Yep and Ryder conjure up a world where dragons and humans interact, and the results are heartwarming and quite funny.” –Publishers Weekly

“A clever and amusing novel that imagines a magical world that nestles right up against our own and sometimes crosses over.” –The Bulleting of the Center for Children’s Books

Praise for A Dragon’s Guide to Making Your Human Smarter
'Yep and Ryder keep the magic coming with their whimsical fantasy, enhanced by Grandpré's sweet drawings. The story positively vibrates with fun.' —Kirkus Reviews

Dragon's Guide to the Care and Feeding of Humans