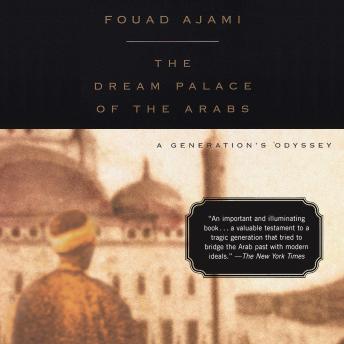 The Dream Palace of the Arabs: A Generation's Odyssey

From Fouad Ajami, an acclaimed author and chronicler of Arab politics, comes a compelling account of how a generation of Arab intellectuals tried to introduce cultural renewals in their homelands through the forces of modernity and secularism. Ultimately, they came to face disappointment, exile, and, on occasion, death. Brilliantly weaving together the strands of a tumultuous century in Arab political thought, history, and poetry, Ajami takes us from the ruins of Beirut's once glittering metropolis to the land of Egypt, where struggle rages between a modernist impulse and an Islamist insurgency, from Nasser's pan-Arab nationalist ambitions to the emergence of an uneasy Pax Americana in Arab lands, from the triumphalism of the Gulf War to the continuing anguished debate over the Israeli-Palestinian peace accords. For anyone who seeks to understand the Middle East, here is an insider's unflinching analysis of the collision between intellectual life and political realities in the Arab world today.