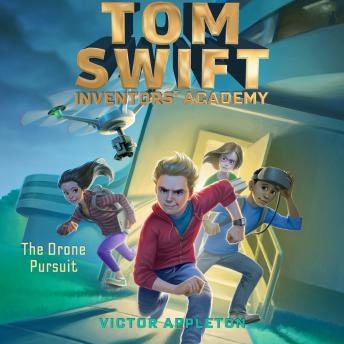 When your dad funds the Swift Academy of Science and Technology, you’re bound to have a bunch of tech at your disposal. So no one bats an eye when Tom and his best friend, Noah, test their new virtual reality drone before class. At the academy, once class starts and the drone is parked, their brainiac friends then launch into farfetched discussions about the curriculum. And when they watch a documentary about the FBI’s most wanted hackers from the eighties, they quickly start speculating that the academy custodian is one of them.

At first, Tom dismisses the idea as another one of his friends’ conspiracy theories. But using their new drone, he spies the custodian acting suspiciously around school. As Tom and his friends search for evidence that the custodian is the missing hacker, the signs become impossible to ignore when Tom gets threatening messages that warn him away from investigating. And when someone releases a virus in the school servers, all bets are off as the adjoining servers at tech giant Swift Enterprises come under fire. Can Tom and his friends uncover the true culprit before it’s too late?