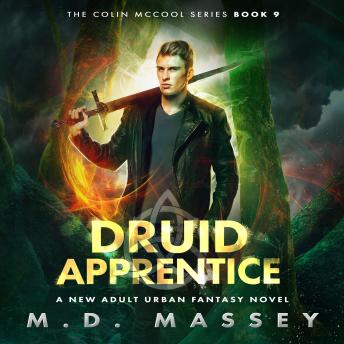 Druid apprentice Colin McCool survived his final confrontation with the Dark Druid. But now he's attracted the attention of evil gods who fear his rapid rise in power. With a slew of demigod assassins on his tail, the young druid must fight or be damned to the dead realm of Tech Duinn, forever...
DRUID APPRENTICEBook 9 In The Colin McCool Paranormal Suspense SeriesI'm Colin McCool, world-class trouble magnet and druid apprentice extraordinaire. I survived my final confrontation with the Dark Druid by the skin of my teeth. But unfortunately, that stunt attracted the attention of some extremely nasty gods who now consider me a threat to their very existence...
Hashtag FML, amirite?
Now, I'm in a race to master the ways of druid magic, all while staying one step ahead of the immortal assassins trying to kill me. Question is, can I wield enough power to protect the people I love from the divine wrath of the gods?
Even I doubt my chances. But with a slew of angry demigods on my tail and a friend's life in the balance, I only have one choice-fight or be damned to the dead realm of Tech Duinn, forever.
- - -
You'll love this urban fantasy novel with a twist of suspense, because everybody loves a down on his luck magician who has to fight to save the people he loves.
Get your copy today!

This title is due for release on October 25, 2019
We'll send you an email as soon as it is available!