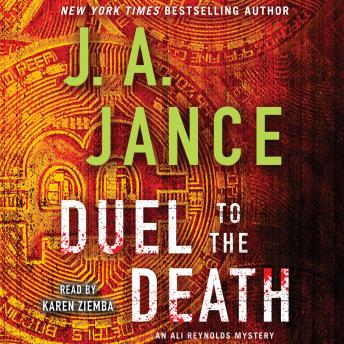 Duel to the Death

After taking down the man responsible for his best friend’s death, Stuart Ramey believes the case is finally closed. That is, until Stu discovers he’s been left with a multimillion dollar fortune in Bitcoin in a desperate attempt by Frigg, a rogue A.I. program created by the killer, to keep itself from being fully deactivated.

To take Frigg down for good, Stu enlists the help of Ali Reynolds and the rest of his cyber security colleagues at High Noon Enterprises. But they are not the only ones who know about Frigg’s existence.

Graciella Miramar, an unassuming accountant to all appearances, is actually the right-hand woman to El Pescado, the leader of a dangerous drug cartel. She’ll do anything to get her hands on that program. With Frigg’s help, Graciella hopes to take over El Pescado’s criminal underworld and become wealthy beyond her wildest dreams. But Stu—and El Pescado and his henchmen—may not be so easily defeated.

As the “grand master of the game” (The Providence Journal), J.A. Jance crafts another electrifying thriller that shows that everything has its price.

Duel to the Death