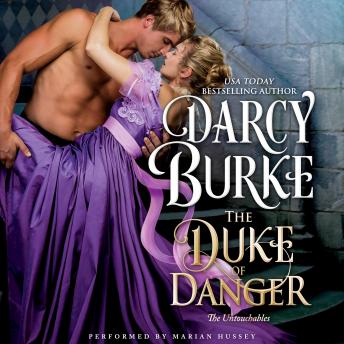 The Duke of Danger

After killing his opponent in a duel, Lionel Maitland, Marquess of Axbridge, is known as the Duke of Danger. Tortured by guilt, he shields himself with a devil-may-care attitude. However, when he kills another man in another duel, he's beyond redemption, even though it wasn't his fault. He refuses to smear a dead man's name, especially when he's left behind a blameless widow who doesn't deserve an even bigger scandal.
Widowed and destitute, Lady Emmaline Townsend must marry the man of her parents' choosing or beg unsympathetic relatives for support. The only way out is to ask for help from the one man she's sworn to hate, the man who owes her anything she asks, the man who killed her husband. They strike a devil's bargain in which passion simmers just beneath the surface. But her dead husband's transgressions come back to haunt them and threaten their chance at love.