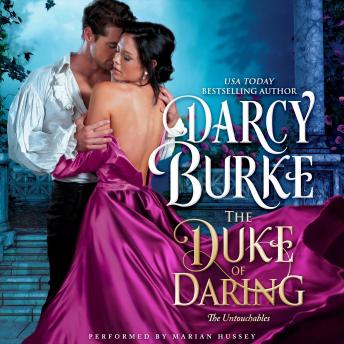 The Duke of Daring

Miss Lucinda Parnell is out of money. A dismal failure at the Marriage Mart, she’d just as soon leave Society far behind. Desperate to earn funds to retire with her grandmother to the country, Lucy disguises herself as a man to gamble in London’s hells. But the Earl of Dartford, an Untouchable she never imagined speaking to let alone spending time with, is onto her in a trice. When he insists on acting as her protector, Lucy fears her chance to remain an independent woman is destined to go up in flames.

After losing his entire family, Andrew Wentworth, Earl of Dartford built a wall to keep attachments at bay. He believed he could keep Miss Parnell safe without compromising his defenses, but she’s exciting and irresistible. Their deepening relationship makes him even more determined to push her away. Nothing will stop him from trying to avoid reliving the anguish of loss. Love is the one risk he doesn’t have the heart to dare.

This title is due for release on June 15, 2017
We'll send you an email as soon as it is available!