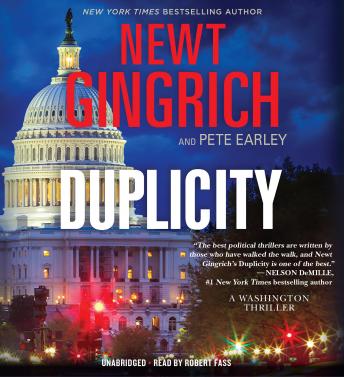 In 'one of the best' political thrillers from two Washington insiders (Nelson DeMille, NYT bestselling author), America's leaders must hunt down a master terrorist in hiding and neutralize the threat of political betrayal.

The greatest nightmare for the free world today would be an extremist in hiding, controlling and coordinating radical Islamic groups at the highest level around the globe.

In Duplicity, two bestselling authors -- former Speaker of the House Newt Gingrich and Pulitzer Prize finalist Pete Earley -- weave a grim and gripping tale of this worst case scenario. From home front fears to an international crisis, this thriller is terrifyingly plausible, ripped straight from the headlines.

When President Sally Allworth decides to reestablish America's Mogadishu embassy in Somalia weeks before Election Day, her challenger says she is playing politics with American lives. That turns out to be true when the embassy is attacked and hostages are taken. Station chief Gunter Conner and Marine captain Brooke Grant end up the unlikely survivors of this Benghazi-style strike. And suddenly, they are the only hope for saving their captured colleagues.

With his in-depth political knowledge of friends and foes on the political stage, only Newt Gingrich could weave such a spellbinding tale of events and personalities, one that could actually happen . . . if America's leaders aren't wary of a world full of duplicity.