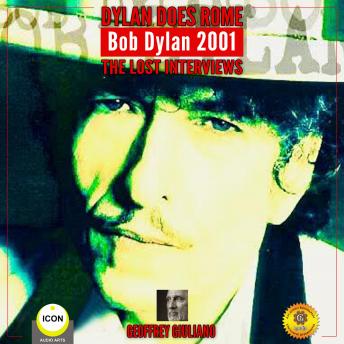 "When you walk around a town like this, you know people were here before you, and they were probably on a much higher, grander level than any of us are." (Bob Dylan, Rome, 2001)
Bob Dylan's near lifelong love affair with Rome started way back in 1963 when he first visited the iconic destination. He has been a regular visitor and devotee of the grand city ever since. In 1984, Dylan once again "went home" to Rome to play several sold-out shows and to breathe the air of this magnificent, historical place.
Today, we are concerned with his now near historical concert and verbose press conference that took place there in July of 2001. Here is a Dylan we rarely see or hear, a Dylan clearly in love with his life, his work, and with the enchanting city in which he now sits.
Written, narrated, and produced by historian, actor, author, and Dylan fan Geoffrey Giuliano, here is a must-have, once-in-a-lifetime audio encounter for any loyal Bob Dylan follower, pop culture collector, or school or university collection.
Music by AudioNautix.com