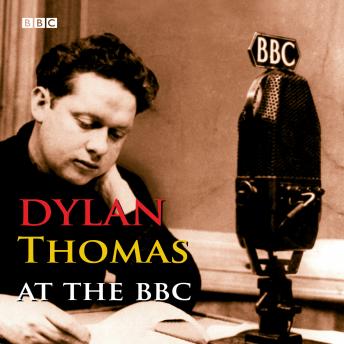 Dylan Thomas at the BBC

Dylan Thomas is one of the 20th century's most celebrated poets. His rich rhetoric created poems of magical imagery, and nowhere is language more rich and fantastic than in his best-known work, 'Under Milk Wood'. He was also a popular radio entertainer and the BBC Archives contain a wealth of material featuring Dylan Thomas - not only readings of his own work, but also dramatic readings of other work such as 'Dr Faustus'. These, together with interviews with the poet, form a fascinating audio portrait of a brilliant man. Presented by Paul Ferris, biographer of Thomas and editor of his letters.Includes: ‘The Hand that Signed the Paper’ (18.10.38), ‘Return Journey to Swansea’ (15.6.47), poems (24.9.49, 26.10.52, 25.9.50) and prose: (3.11.52, 17.6.53, 5.10.53, 5.11.53).

Dylan Thomas at the BBC