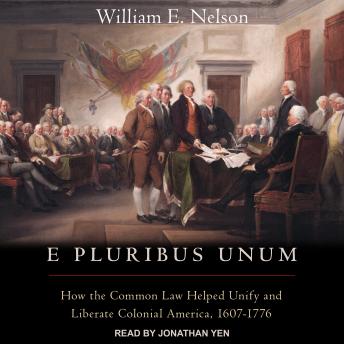 From their inception, the colonies exercised a range of approaches to the law. While New England based its legal system around the word of God, Maryland followed the common law tradition, and New York adhered to Dutch law. Over time, though, the British crown standardized legal procedure to more uniformly and efficiently exert control over the Empire. But, while the common law emerged as the dominant system across the colonies, its effects were far from what English rulers had envisioned.

E Pluribus Unum highlights the political context in which the common law developed and how it influenced the United States Constitution. In practice, the triumph of the common law over competing approaches gave lawyers more authority than governing officials. By the end of the eighteenth century, many colonial legal professionals began to espouse constitutional ideology that would mature into the doctrine of judicial review. In turn, laypeople came to accept constitutional doctrine by the time of independence in 1776.

Nelson shows that the colonies' gradual embrace of the common law was instrumental to the establishment of the United States. Not simply a masterful legal history of colonial America, Nelson's magnum opus fundamentally reshapes our understanding of the sources of both the American Revolution and the Founding.