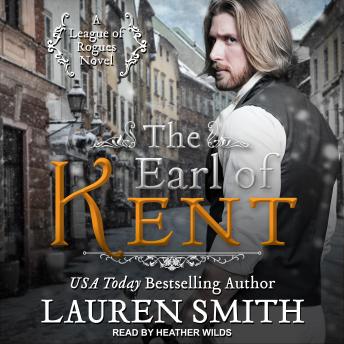 The Earl of Kent

Targeted by the enemies of a friend, roguish Phillip Wilkes, the Earl of Kent, is nearly killed in a violent attack. Beaten and left for dead, he is rescued and nursed back to health by a beautiful angel that he's convinced exists only in his dreams. When he recovers and learns his heart was burning for none other than the sister of his closest friend, he knows she is forbidden to him. He runs away from the only woman who has ever shown him true kindness because who could ever learn to love a broken man?

She believes in the healing power of love . . .

Ella Humphrey is cursed when it comes to love. Two overprotective brothers and the entire League of Rogues, are determined to protect her at all costs, even from falling in love. When a man at death's door is delivered to her care, she recognizes him as the friend of one of her brothers, and more importantly as the man she secretly loved for years. As her affection deepens for the wounded earl, she envisions a happy future with him. Yet the moment Phillip can walk again, he leaves Ella and breaks her heart.

Can mistletoe work mischief and miracles?