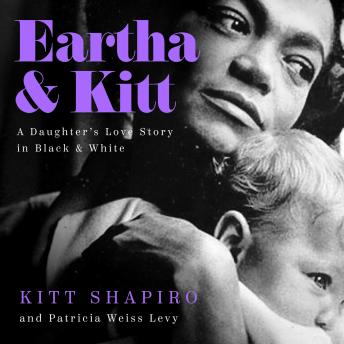 Eartha & Kitt: A Daughter's Love Story in Black and White

In this unique combination of African-American, music, and cultural history, we come to know one of the greatest stars the world has ever seen-Eartha Kitt-as revealed by the person who knew her best, her daughter. Eartha, who was a mix of Black, Cherokee, and white, identified as Black, but Kitt, her biological daughter by a white man, is blonde and pale. This is the story of a little white girl raised by her natural mother, who was the biggest Black celebrity in the world. For three decades before Kitt married, they traveled the world together, mother and daughter. Eartha came from a hard background (she was born on a cotton plantation) and did not have her own familial ties to lean on-she and Kitt were each other's whole world. Eartha's legacy is still felt today: we still listen to "Santa Baby" every Christmas, she starred as Helen of Troy opposite Orson Welles in Dr. Faustus, and she stole the show as Yzma in The Emperor's New Groove. Lupita Nyong'o was recently asked to name the two people she admired most. She chose Eartha Kitt and Katherine Hepburn. In these pages, Eartha Kitt comes to life so vividly you'll feel as if you'd met her. Filled with love and poignant laughter, Eartha & Kitt captures the passion and energy of two remarkable women.

Eartha & Kitt: A Daughter's Love Story in Black and White