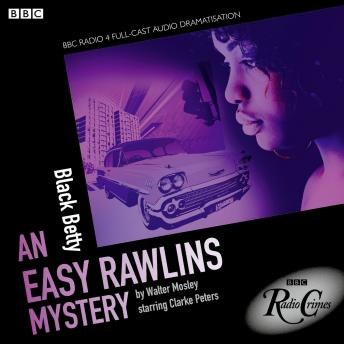 On the shady side of LA in 1961, African-American private eye Easy Rawlins can go places a white detective cannot. So when Saul Lynx needs a missing woman found, he hires Easy to do his dirty work. Elizabeth Eady - ‘Black Betty’ - is as dark as midnight and just as beautiful. An old acquaintance of Easy’s when he was a child back in Texas, she had been working for a rich white woman in Beverley Hills, but left her job with no forwarding address. Easy knows she always brings trouble in her wake, but he has a family to support and needs Lynx’s money. With Martin Luther King in the news and a new young president in the White House, it’s a time of hope for most black Americans. But as Easy tries to unravel a case that sends him in search of his own past, he finds only death under the stones he is paid to turn over... Starring Clarke Peters, John Guerrasio and Alibe Parsons and dramatised by Bonnie Greer, this was first broadcast as part of BBC Radio 4’s ‘American Noir’ season. Warning: contains strong language.