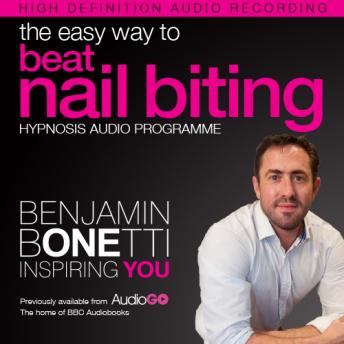 The Easy Way to Beat Nail Biting with Hypnosis

After having enough of my husband biting his nails for the last 10 years I managed to convince him to have a go at Hypnosis! After just 2 weeks he has completely stopped, thank you Mr Bonetti you have made a real difference to his life. Relax, control anxiety, and develop the confidence to put nail biting behind you with the help of this download. Benjamin Bonetti is one of the world's bestselling hypnotherapists. His advanced hypnotic technique sends positive messages to your subconscious so you can accomplish your goals. Powerful affirmations and visualisations encourage change to happen naturally. Through hypnosis, learn to let go of negative habits, and develop stronger, more beautiful nails. Now Includes: Beat Nail Biting with Hypnosis Audio and a complimentary PDF Chapter of Benjamin's 2013 Bestselling Book How To Change Your Life. About Benjamin: Using the three pillars of success, Benjamin Bonetti, bestselling self-help author and hypnotherapist, helps people, through fitness, well-being and nutrition, become a better version of themselves. Benjamin's no-nonsense and practical advice has been regarded as refreshing and inspiring within the arena of self -development. He utilises hypnosis and Neuro-linguistic Programming to change thinking patterns and inspires others to take massive action, through a number of tools designed to change the mind-set.Recommended Weight Loss Audio for 2014 by the Metro Magazine. In 2012 Benjamin became the leading BBC Self-Help Audiobooks author with a new advanced range of hypnosis audios reaching the Top Ten Charts within just a few weeks after release. The Easy Way range includes the titles; Weight Loss, Original Gastric Band, Confidence, Self Esteem and 7 other titles. 23rd Bestselling Non-Fiction Book WH-Smith Christmas, New Year 2013/14. Ex Military - Benjamin has appeared in a number of magazines, radio and TV features as the "Celebrity Secret Weapon", including; The Sun, BBC Radio, Metro Magazine, The Irish Times, Friday Magazine, Bookish, HR Grapevine, Diets In Shape, Slim At Home, Decision Business Magazine, The Gulf News, The Best You, Celebrity Wife Swap, Latest 7 Magazine and is the "preferred" A-List Coach for International Celebrities.