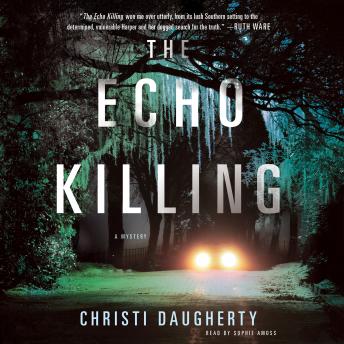 The Echo Killing: A Mystery

'Narrator Sophie Amoss creates a menacing dark drama that will grab listeners right away. She enhances the story with superb timing and a delicious Southern drawl' — AudioFile Magazine

When a murder echoing a fifteen-year-old cold case rocks the Southern town of Savannah, crime reporter Harper McClain risks everything to find the identity of this calculated killer in Christi Daugherty's new audiobook The Echo Killing.
A city of antebellum architecture, picturesque parks, and cobblestone streets, Savannah moves at a graceful pace. But for Harper McClain, the timeless beauty and culture that distinguishes her home’s Southern heritage vanishes during the dark and dangerous nights. She wouldn’t have it any other way. Not even finding her mother brutally murdered in their home when she was twelve has made her love Savannah any less.
Her mother’s killer was never found, and that unsolved murder left Harper with an obsession that drove her to become one of the best crime reporters in the state of Georgia. She spends her nights with the police, searching for criminals. Her latest investigation takes her to the scene of a homicide where the details are hauntingly familiar: a young girl being led from the scene by a detective, a female victim naked and stabbed multiple times in the kitchen, and no traces of any evidence pointing towards a suspect.
Harper has seen all of this before in her own life. The similarities between the murder of Marie Whitney and her own mother’s death lead her to believe they’re both victims of the same killer. At last, she has the chance to find the murderer who’s eluded justice for fifteen years and make sure another little girl isn’t forever haunted by a senseless act of violence—even if it puts Harper in the killer’s cross-hairs…
Praise for The Echo Killing:

'Fans of Hank Phillippi Ryan and Michael Connelly will thoroughly enjoy this new voice in crime fiction.' — Library Journal
'Daugherty delivers an insider's view of journalism, from the adrenaline rush of covering a major story to the drudgery of delving into the background behind a story.' — Associated Press