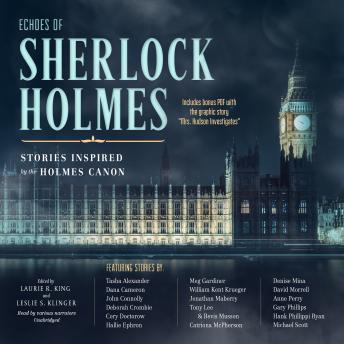 Echoes of Sherlock Holmes: Stories Inspired by the Holmes Canon

A brand-new anthology of stories inspired by the Arthur Conan Doyle canon In this follow-up to the acclaimed In the Company of Sherlock Holmes, expert Sherlockians Laurie King and Leslie Klinger put forth the question: What happens when great writers/creators who are not known as Sherlock Holmes devotees admit to being inspired by Conan Doyle stories? While some are highly regarded mystery writers, others are best known for their work in the fields of fantasy or science fiction. All of these talented authors, however, share a great admiration for Arthur Conan Doyle and his greatest creations, Sherlock Holmes and Dr. Watson. To the editors' great delight, these stories go in many directions. Some explore the spirit of Holmes himself; others tell of detectives inspired by Holmes' adventures or methods. A young boy becomes a detective; a young woman sharpens her investigative skills; an aging actress and a housemaid each find that they have unexpected talents. Other characters from the Holmes stories are explored, and even non-Holmesian tales by Conan Doyle are echoed. The variations are endless! Although not a formal collection of new Sherlock Holmes stories, some entries do fit that mold while others were inspired by the Conan Doyle canon. The results are breathtaking, for fans of Holmes and Watson as well as listeners new to Doyle's writing. "'Inspired' is the key word here, for contributors have been encouraged to interpret their remit even more broadly than in the editors' previous two collections ...Every fan will find different reasons to cheer. And they'll all marvel at the inventive range of this salute to the greatest of all fictional detectives."-Kirkus Reviews

Echoes of Sherlock Holmes: Stories Inspired by the Holmes Canon