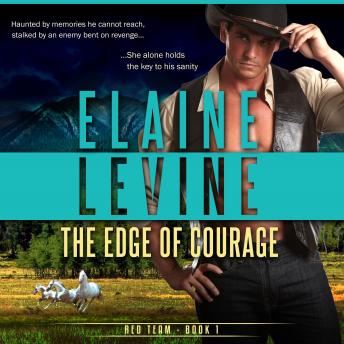 The Edge of Courage

Step into Elaine Levine's exciting new series of alpha warriors--products of the government's secret corps of assassins called the Red Team:
Haunted by memories he cannot reach, stalked by an enemy bent on revenge . . .
Rocco Silas has come home to Wyoming after long years as a Red Team operative in Afghanistan. It isn't easy returning to civilian life, especially burdened as he is with a staggering case of PTSD or hunted as he is by an enemy determined to seek an eye-for-eye--neither of which can he battle until he confronts the truth of what happened one fateful day in the high mountain ranges of the Hindu Kush.
. . . She alone holds the key to his sanity.
Mandy Fielding's dream of opening a therapeutic riding center on her family's ranch is almost within her grasp--until she hires Rocco Silas, a dangerous ex-Spec Ops friend of her brother's. His haunted eyes and passionate touch promise a love she never dared believe possible. Can they confront the truth of his past and build a future together or will the enemy stalking him destroy them both?

This title is due for release on June 8, 2014
We'll send you an email as soon as it is available!