The Edge of Disaster: Rebuilding a Resilient Nation 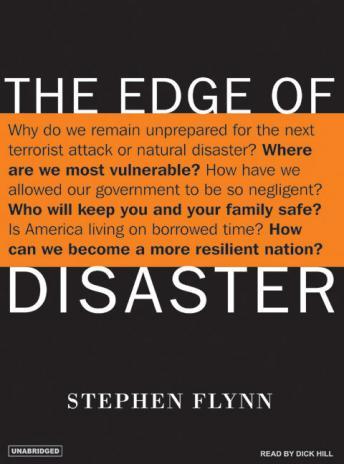 Americans have been shocked in the past few years to discover how vulnerable our nation is to disaster, be it terrorist attack or act of God. But what's truly shocking, argues leading security expert Stephen Flynn, is how little we have learned from the cataclysms of September 11 and Hurricane Katrina. When it comes to catastrophe, America is living on borrowed time-and squandering it. In this eye-opening, vitally important new book, Flynn issues an overdue wake-up call demanding that we shake off our denial and sense of helplessness and start preparing immediately for a safer future.

With chilling frankness and clarity, Flynn describes how we have become increasingly vulnerable to disaster by grossly neglecting the complex infrastructure that provides our water, food, health care, electricity, and transportation. Through a series of realistic scenarios, he dramatizes the prime areas of documented risk. An attack on a northern New Jersey chemical plant could kill untold thousands and cripple our largest urban area. A bio-pathogen secretly introduced into the cattle-feeder facilities concentrated around Amarillo, Texas, would turn the nation's food supply into an agent of death. The destruction of a ship with a cargo of explosive fuels in Los Angeles harbor could bring the West Coast economy to its knees.

Horrifying as another terrorist attack would be, Flynn insists that due to our woeful lack of preparedness for foreseeable disasters, the wrath of Mother Nature may be our gravest threat. We have been taking for granted infrastructure bequeathed to us by earlier generations, which are now crumbling. Decades of skimping on public health leave us dangerously exposed to a flupandemic that could kill millions. Massive flooding could knock out Depression-era canal locks on the Upper Mississippi, starving power plants of the coal they need to generate electricity. The next earthquake in San Francisco could destroy century-old levees, contaminating the fresh water supply that millions of Californians rely on for their survival.

But it doesn't have to be this way. After examining why we are more vulnerable to disaster than ever before, Flynn turns the tables and explores what we can do about it, as individuals and as a society. He outlines a detailed, pragmatic program we can embrace right now to enhance our preparedness across the board and ensure true national security.
Hard-hitting yet ultimately optimistic, The Edge of Disaster is a passionate call to make resiliency to disaster our top national priority. With the wounds of recent national tragedies still unhealed, this is a book no American can afford to ignore.