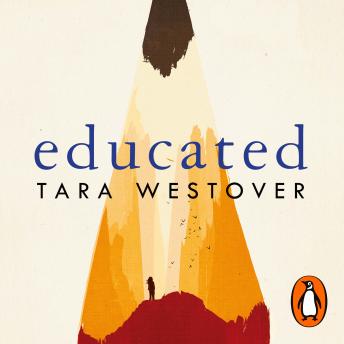 Tara Westover and her family grew up preparing for the End of Days but, according to the government, she didn't exist. She hadn't been registered for a birth certificate. She had no school records because she'd never set foot in a classroom, and no medical records because her father didn't believe in hospitals.

As she grew older, her father became more radical and her brother more violent. At sixteen, Tara knew she had to leave home. In doing so she discovered both the transformative power of education, and the price she had to pay for it.

'An amazing story, and truly inspiring. The kind of book everyone will enjoy. IT'S EVEN BETTER THAN YOU'VE HEARD.' - Bill Gates

· From one of TIME magazine's 100 most influential people of 2019
· Shortlisted for the 2018 BAMB Readers' Awards
· Recommended as a summer read by Barack Obama, Antony Beevor, India Knight, Blake Morrison and Nina Stibbe

Harrowing details but an utterly absorbing story. As a listener I was hopeful throughout. I kept looking for excuses to drive or walk alone so that I could listen. I can't recommend this highly enough. Loved it.

Well written. Well read. Would recommend it to everyone.

A really good read. Speaks to the transformative power of education. A thoroughly satisfying ending as well.

It is not an easy listen but definitely a thought provoking and enlightening one. An eye-opening, must read that keeps you engrossed from the beginning to the very end.

Enjoyable listen, obviously an inspirational story, appreciated the fact that it continues long past her originally leaving home and continues with the ongoing trials of combining past and present.

When I saw ‘Educated’ by Tara Westover, I didn’t think too much of it. What I quite like about the app is that is allows you to listen between three and five minutes of a book and you can then decide whether you want to download and listen to the rest of it. Every time I opened the app, ‘Educated’ popped up. Reluctantly, I decided to listen to the first few minutes to get an understanding of what it’s about. It was intriguing! It’s about Tara Westover who grows up in a Mormon culture. I didn’t (still don’t really), know too much about Mormonism. It was absolutely fascinating, and very soon I was hooked, and every opportunity I  got, I would listen a bit more. Her father was against relying on the government in any way, so did not register his children when they were born. He only believed in home remedies; so no going to hospital if you’ve seriously injured yourself. And all the education you needed you got at home. The fact that Tara was able to move out and get educated, is incredible. Highly recommendable.

Was slow to start but picked up by chapter 16/17. Was a great story and read well. Was hoping for more of a background and understanding of the community and growing up within the church and it’s ways but was still very good

Was absolutely enthralled by Tara’s story. Found it hard today too listening. An incredible woman.

Woah! This book should be made into a movie. Such an incredible story of how this amazing woman went from being home schooled by her survivalist family who didn’t believe in hospitals and thought the government was out to get them, to getting her PHD. Definitely recommend this one!!

What a captivating story about learning what it means to be the person you choose to be, not what someone else would choose for you.

A disturbing at times account. I found it compelling listening. The power of education prevails.

Ugh, I had to read this as it was chosen by my book club. It felt like it was a list of all the horrid things that’d happened to the author and then written a book around it. Harrowing treatment by controlling and ignorant parents bit awfully written

I listened to this book driving to northern NSW from Sydney Australia and loved the whole thing it was an eye opener I’ve always seen things in tv about the Mormons In America and heard from my dad about them in the UK the extreme behaviour and isolation they partake in each to their own but it’s opened my perception to the group at a whole. It was a gripping story and hard to hear but sometimes relatable so for me I give it 5 stars all the way.

Harrowing at times, but an enthralling story! I admire the author very much, and would thoroughly recommend this book.

Ok story for me nothing great.

What an amazing book. There were tears, laughter and relatability!

This was without a doubt one of the most gripping and addictive stories I’ve ever read. Narrated beautifully I felt entirely immersed from the first chapter and found myself searching for times to sneak another little chapter What a phenomenal account of courage, what an incredible story where conviction of self identity and the mere knowledge of what is right and what is wrong ultimately prevails in justice

I loved this book. I didn’t want to stop listening. I was gripped from beginning to end.

An amazing book, can't stop talking about it!

Really enjoyed this book. When I say that that I was confronted and disgusted at the ignorance that still exists in some parts of America and these are people that can vote in an election that affects the whole world. Scary! A real page turner and what a strong, inspiring woman.

This was a most life changing book!! It was better than i had imagined. If gripped me from the first 10 pages

A powerful account that relates the author's experience evenly and without the ranting recrimination that one might expect, under the circumstances.

This is a brilliantly written book. It was hard to put down.

Absolutely gripping story, extremely powerful and inspirational at the same time!! Throughly enjoyed the listening with such intensity..thanks!

Its a must read

A fascinating eye opener! I really loved this book. Well written, keeping you on the edge of your seat all the way. Excellent narration. Highly recommended

This story had me on the edge of my seat, will she, won’t she? Is he going to? A remarkable story of family ties, abuse, injury and recovery, an education at all costs, no matter the domination of a belief and the desperation to find who Tara is/was. And in all of the above, she finds exquisite moments of joy and delight. Tara relates an incident that inspired me. She is on the roof parapet of a chapel with fellow students and her professor. The wind is blowing and all but Tara are clinging to the roof. She is standing upright admiring the view. When asked why she wasn’t afraid, she said “Its just wind, only your fear is seeing the wind as danger”. This is the best story I have read in a long while.

I am almost at the end. From the Princess on the mountain to the junk yard, the clicking of fingers and oils being mixed, I was a silent bystander to it all in this book. Incredibly well -written, words and self-awareness bringing family members to life - this book is an ABSOLUTE must. I have written 2 books - 2nd one about to be published- and am enjoying this book thoroughly - even if my breath catches in my throat from time to time. Excellently narrated as well. Flawless job.

Absolutely fantastic! This is not the kind of book I'd normally listen to but I'd heard good things from friends and I'm so glad I decided to listen, this is absolutely gripping, inspiring and so interesting.