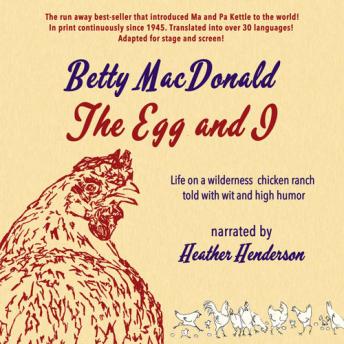 The Egg and I

"The Egg and I" took first America by storm in 1945, selling over 1,000,000 within ten months of it's original publication. Betty MacDonald's first book about her adventures as a young wife on a chicken farm on the Olympic Peninsula in Washington state was a breath of fresh air to a world that, in the wake of WWII, sorely needed it. Betty lived with her first husband near Chimacum, Washington - a newlywed doing her best to adjust to and help operate their small chicken farm, from 1927 to 1931. MacDonald was a keen observer of the people around her, and she calls a spade a spade, "and there were a plenty of spades."

The Egg and I was adapted for stage, radio and screen, with the movie version starring Claudette Colbert and Fred MacMurray. The movie version also introduced the world to Ma and Pa Kettle, the eccentric country bumpkins portrayed by the inimitable Marjorie Main and Percy Kilbride, who were so popular that a string of spin-off movies was made about their adventures. Betty MacDonald wrote three other memoirs, as well as the still popular Mrs. Piggle-Wiggle series for children, and is recognized by many as an important America humorist. In her MA thesis, The Egg and Us: Contextualization and Historicization (2014), Samantha Hoekstra writes:

"Some scholars credit MacDonald with having inspired Shirley Jackson, Erma Bombeck, and other purveyors of domestic humor, but perhaps the most appropriate inheritor of the MacDonald tradition is the contemporary writer David Sedaris. ... One of the most significant similarities is that the lack of conventionality in both families is presented as normal and worthy of respect. Even as they make fun of their families' foibles, the authors convey an undeniable warmth, affection, and acceptance. In a sense, they challenge the very notion of a 'normal' American family."

This is why MacDonald's writing is still relevant and funny today.