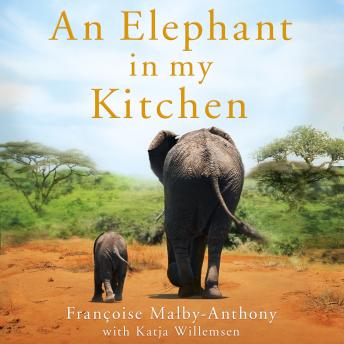 An Elephant in My Kitchen: What the Herd Taught Me about Love, Courage and Survival

'The most magical book about the African bush since Born Free' - Daily Mail
Françoise Malby-Anthony never expected to find herself responsible for a herd of elephants with a troubled past. A chic Parisienne, her life changed forever when she fell in love with South African conservationist Lawrence Anthony. Together they founded a game reserve but after Lawrence's death, Françoise faced the daunting responsibility of running Thula Thula without him. Poachers attacked their rhinos, their security team wouldn't take orders from a woman and the authorities were threatening to cull their beloved elephant family. On top of that, the herd's feisty new matriarch Frankie didn't like her.
In this heart-warming and moving book, Françoise describes how she fought to protect the herd and to make her dream of building a wildlife rescue centre a reality. She found herself caring for a lost baby elephant who turned up at her house, and offering refuge to traumatized orphaned rhinos, and a hippo called Charlie who was scared of water. As she learned to trust herself, she discovered she'd had Frankie wrong all along . . .
Filled with extraordinary animals and the humans who dedicate their lives to saving them, An Elephant in My Kitchen by Françoise Malby-Anthony is a captivating and gripping read.

Elephant in My Kitchen: What the Herd Taught Me about Love, Courage and Survival