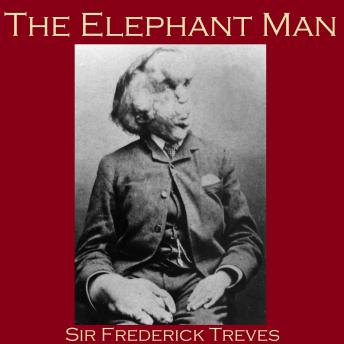 Sir Frederick Treves, 1st Baronet, GCVO, CH, CB (1853 - 1923) was a prominent British surgeon of the Victorian and Edwardian eras, best known for his friendship with Joseph Merrick, "the Elephant Man".

"The Elephant Man" is Treves' own first-hand account of how he met and befriended Joseph Merrick (whom he mistakenly calls John Merrick), a young man with very severe physical deformities, who was being exhibited as a side-show freak as being half-man half-elephant. Treves initially invited Merrick to his rooms in the London Hospital so as to examine him, and to ensure Merrick's admittance he gave him his card. Two years later, when Merrick arrived back in London, abandoned by his freak-show handler and chased by a mob, he showed the police who rescued him Treves' card. Through this fortuitous chance, Merrick came to live at the London hospital under the care and guardianship of Treves. The two men developed a great friendship and Treves was astonished to discover that Merrick was not only a highly intelligent man, but also a hopeless romantic.

This title is due for release on December 3, 2016
We'll send you an email as soon as it is available!