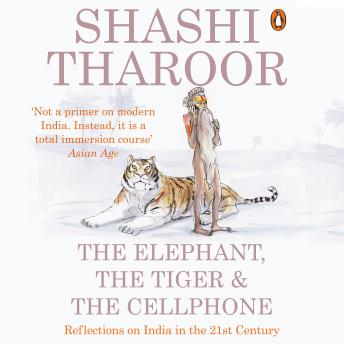 The Elephant, the Tiger and the Cellphone

For more than four decades after gaining independence, India, with its massive size and population, staggering poverty and slow rate of growth, was associated with the plodding, somnolent elephant, comfortably resting on its achievements of centuries gone by. Then in the early 1990s the elephant seemed to wake up from its slumber and slowly begin to change—until today, in the first decade of the twenty-first century, some have begun to see it morphing into a tiger. As India turns sixty, Shashi Tharoor, novelist and essayist, reminds us of the paradox that is India, the elephant that is becoming a tiger: with the highest number of billionaires in Asia, it still has the largest number of people living amid poverty and neglect, and more children who have not seen the inside of a schoolroom than any other country. So what does the twenty-first century hold for India? Will it bring the strength of the tiger and the size of an elephant to bear upon the world? Or will it remain an elephant at heart? In more than sixty essays organized thematically into six parts, Shashi Tharoor analyses the forces that have made twenty-first century India—and could yet unmake it. He discusses the country's transformation in his characteristic lucid prose, writing with passion and engagement on a broad range of subjects, from the very notion of 'Indianness' in a pluralist society to the evolution of the once sleeping giant into a world leader in the realms of science and technology; from the men and women who make up his India—Gandhi and Nehru and the less obvious Ramanujan and Krishna Menon—to an eclectic array of Indian experiences and realities, virtual and spiritual, political and filmi. The book is leavened with whimsical and witty pieces on cricket, Bollywood and the national penchant for holidays, and topped off with an A to Z glossary on Indianness, written with tongue firmly in cheek. Diverting and instructive as ever, artfully combining hard facts and statistics with personal opinions and observations, Tharoor offers a fresh, insightful look at this timeless and fast-changing society, emphasizing that India must rise above the past if it is to conquer the future.

Elephant, the Tiger and the Cellphone