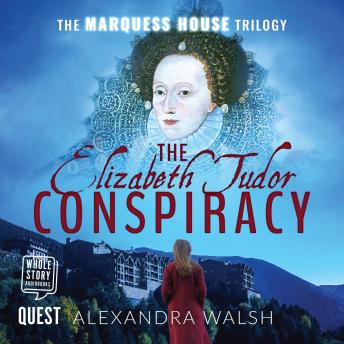 The Elizabeth Tudor Conspiracy Is the second book in the Marquess House trilogy, a gripping dual timeline conspiracy thriller with an ingenious twist on Tudor history. Perfect for fans of Dan Brown, Philippa Gregory and Kate Mosse.

Elizabeth I has survived hundreds of plots against her, but now she faces the revelation of a secret she thought would remain hidden forever. Elizabeth is not the last of the Tudor line - there are two more legitimate heirs to her crown. Her sworn enemy, Philip II, King of Spain, has discovered the secret and thinks he can control the missing princess as his puppet queen. Can Elizabeth maintain control over her throne? Meanwhile, in 2018 - Dr Perdita Rivers and her twin sister Piper are safely hidden in Andorra. Despite their narrow escape from those pursuing them, Perdita is determined to continue her grandmother's legacy by uncovering her ground-breaking research into the English royal bloodline. But she soon realises that nothing about the Tudor era was as it seemed. With their enemies still tracking them, Perdita and Piper must succeed in exposing the secrets of history or there is no hope of them escaping alive...