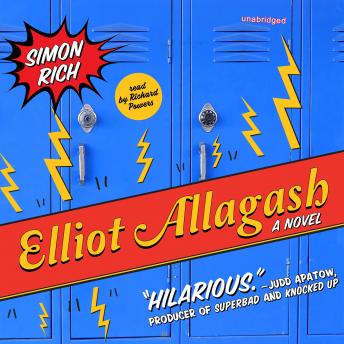 Simon Rich dazzled readers with his absurdist sense of humor in his hilarious collections Ant Farm and Free-Range Chickens. Now comes Rich’s rollicking debut novel, which explores the strangest, most twisted, and comically fraught terrain of them all: high school.Seymour Herson is the least popular student at Glendale, a private school in Manhattan. He’s painfully shy, physically inept, and his new nickname, “Chunk-Style,” is in danger of entering common usage. But Seymour’s solitary existence comes to a swift end when he meets the new transfer student: Elliot Allagash, evil heir of America’s largest fortune.Elliot’s rampant delinquency has already gotten him expelled from dozens of prep schools around the country. But despite his best efforts, he can’t get himself thrown out of Glendale; his father has simply donated too much money. Bitter and bored, Elliot decides to amuse himself by taking up a challenging and expensive new hobby: transforming Seymour into the most popular student in the school.An unlikely friendship develops between the two loners as Elliot introduces Seymour to new concepts, like power, sabotage, and vengeance. With Elliot as his diabolical strategist and investor, Seymour scores a spot on the basketball team, becomes class president, and ruthlessly destroys his enemies. Yet despite the glow of newfound popularity, Seymour feels increasingly uneasy with Elliot’s wily designs, for an Allagash victory is dishonorable at its best, and ruinous at its worst.Cunningly playful and wickedly funny, Elliot Allagash is a tale about all of the incredible things that money can buy, and the one or two things that it can’t.

This title is due for release on January 12, 2011
We'll send you an email as soon as it is available!