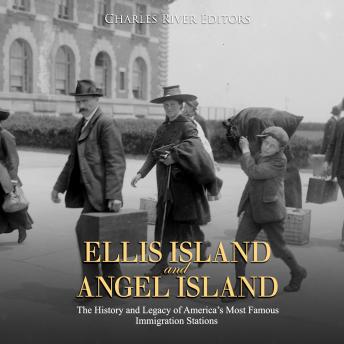 Ellis Island and Angel Island: The History and Legacy of America's Most Famous Immigration Stations

On New Year's Day 1892, a young Irish girl named Annie Moore stepped off the steamship Nevada and landed on a tiny island that once held a naval fort. As she made her way through the large building on that island, Annie was processed as the first immigrant to come to America through Ellis Island. Like so many immigrants before her, she and her family settled in an Irish neighborhood in the city, and she would live out the rest of her days there.
Thanks to the opening of Ellis Island near the end of the 19th century, immigration into New York City exploded, and the city's population nearly doubled in a decade. By the 1900s, 2 million people considered themselves New Yorkers, and Ellis Island would be responsible not just for that but for much of the influx of immigrants into the nation as a whole over the next half a century. To this day, about a third of the Big Apple's population is comprised of immigrants today, making it one of the most diverse cities in the world.
Angel Island, the largest island in San Francisco Bay at about 740 acres, was originally named when Don Juan Manuel Ayala sailed into San Francisco Bay. Supposedly, the island was named "Angel" because the land mass appeared to him as an angel guarding the bay, and when Ayala made a map of the Bay, on it he marked Angel Island as, "Isla de Los Angeles."
The island is currently a large state park with beautiful views of the San Francisco Bay and skyline, but the most noteworthy part of the park is the immigration museum. That site is what makes Angel Island so famous today, as it remains best known for being the entry point for Asian immigrants to the United States from 1910-1940.There is no way to know for sure how many people actually passed through Angel Island because of the destruction of most of the historical documentation in a fire, but historians estimate that it was between 100,000 and 500,000 people.

Ellis Island and Angel Island: The History and Legacy of America's Most Famous Immigration Stations