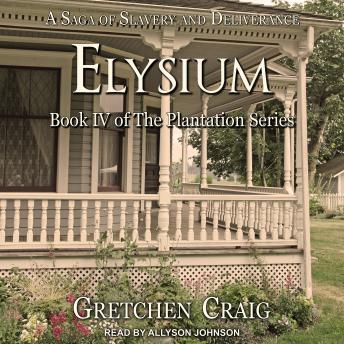 Lily Palmer flees with her daughter to take refuge on her uncle's farm in Louisiana. Here she finds herself in a world struggling with the after effects of the Civil War. For the first time, she is confronted with her own careless assumptions about race as she learns to appreciate the humanity of everyone around her. Threatening the fragile peace she achieves, her love for Alistair Whiteaker collides with her own dark past, shattering all hope for a new life.

Alistair Whiteaker returns from the war determined to make amends for having owned the men and women who toiled on his plantation. Sickened by his part in perpetuating slavery, he works to thwart the aims of white supremacists and violent racists. At the same time, he longs to make a family with Lily and her daughter. To do that, he must first eliminate the man who inflicts another kind of injustice on the woman he loves.

Thomas Bickell uses every ounce of his talent and courage to win suffrage for black men. An ex-slave himself, he knows Emancipation is not enough. When Fanny Brown is assaulted by white supremacists whose true target is Thomas himself, he realizes his greatest challenge may be to reclaim the heart of his beloved.