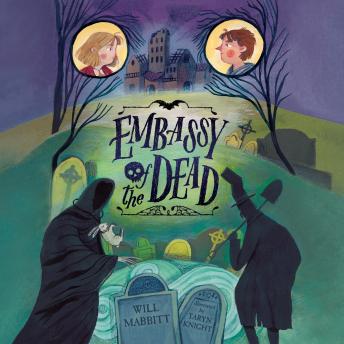 Embassy of the Dead

Written By: Will Mabbitt

When Jake Green opens a mysterious box containing a severed finger, he accidentally summons a grim reaper intent on dragging him to the Eternal Void (yes, it's as fatal as it sounds). Now Jake is running for his life. Luckily, he has a knack for talking to ghosts, which just might help him survive long enough to reach the Embassy of the Dead and plead his case. With the help of a prankster poltergeist and a dead undertaker, Jake dodges fearsome undead creatures, discovers his own ghostly abilities, and gets excused from the school field trip due to a terrible (and made-up) bout of diarrhea. But the Embassy has its own problems, and Jake must be very careful where he places his trust-in both the living and the dead. With a plot that zips and a colorful cast of characters, this delightful new series delivers laughs and shivers in equal measure.

Embassy of the Dead