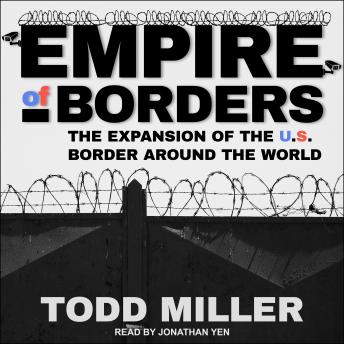 Empire of Borders: How the US is Exporting its Border Around the World

The twenty-first century has been an era of hardening borders-increased borderland patrols, surveillance, and militarization are widening the chasm between those who can vacation (or do business) where they please, and others whose movements are restricted by armed guards. But as journalist Todd Miller finds in Empire of Borders, the U.S. border is also becoming increasingly fluid, expanding thousands of miles outside of U.S. territory often to protect Washington's interests.

In places like Argentina, Kosovo, Honduras, Jordan, and Afghanistan, U.S. border patrol works alongside local agents to block migrants, terrorists, drug runners, and smugglers from ever approaching the U.S. Empire of Borders traces the rise of this border regime, along with practices of 'extreme vetting' and the vast global industry for border and homeland security. But in visiting the Jordan/Syria border, as well as Puerto Rico, Guatemala, Kenya, Palestine, Mexico, and the Philippines, Miller finds instead a global war against the poor.

Empire of Borders: How the US is Exporting its Border Around the World