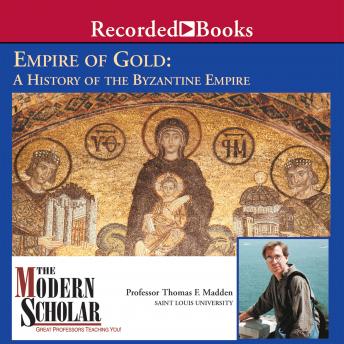 Empire of Gold: A History of the Byzantine Empire

In Empire of Gold: A History of the Byzantine Empire, esteemed university professor Thomas F. Madden offers a fascinating series of lectures on the history of the remarkable culture and state that developed out of the ancient Roman Empire, particularly its eastern portion, throughout the Middle Ages. The story here therefore begins at an ending, that of the Roman Empire, in the third century AD, and continues over the next one thousand years. This new culture arising from the old will have a dramatic impact on western European culture and on the culture of the Islamic East, and most especially on the culture and modern history of Greeks, Greek Orthodox, and Russians, who were all very much affected by the Byzantine Empire. With incisive commentary, Professor Madden leads a discussion covering Justinian's reconquest of the West, the great city of Constantinople, and the aftermath and influence of this extraordinary empire.

Empire of Gold: A History of the Byzantine Empire