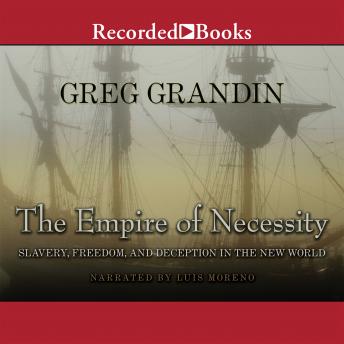 The Empire of Necessity: Slavery, Freedom, and Deception in the New World

From the acclaimed author of Fordlandia, the story of a remarkable slave rebellion that illuminates America' s struggle with slavery and freedom during the Age of Revolution and beyond One morning in 1805, off a remote island in the South Pacific, Captain Amasa Delano, a New England seal hunter, climbed aboard a distressed Spanish ship carrying scores of West Africans he thought were slaves. They weren' t. Having earlier seized control of the vessel and slaughtered most of the crew, they were staging an elaborate ruse, acting as if they were humble servants. When Delano, an idealistic, anti-slavery republican, finally realized the deception, he responded with explosive violence. Drawing on research on four continents, The Empire of Necessity explores the multiple forces that culminated in this extraordinary event-- an event that already inspired Herman Melville' s masterpiece Benito Cereno. Now historian Greg Grandin, with the gripping storytelling that was praised in Fordlandia, uses the dramatic happenings of that day to map a new transnational history of slavery in the Americas, capturing the clash of peoples, economies, and faiths that was the New World in the early 1800s.

Empire of Necessity: Slavery, Freedom, and Deception in the New World