Empire: The Life, Legend, and Madness of Howard Hughes 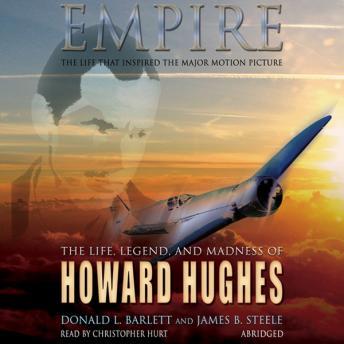 Howard Hughes lived one of the greatest, most heroic, misunderstood, mysterious, bizarre, and tragic lives in American history. Here at last, in a uniquely full and brilliantly documented biography by a Pulitzer Prize–winning investigative team, the mythology that surrounded that life is disentangled from the truth.
Hughes had always been different. Raised by overprotective parents, pathologically fearful of germs, in awe of his father, unable to make friends, he grew into a man ruled by madness. Certainly his riches set him apart. But he was also tough. Orphaned and a millionaire at eighteen, Hughes repudiated his relatives, seized control of the Hughes Tool Company, the linchpin of his fortune, and went on to become a flamboyant movie producer, holder of many world aviation records, principal owner of Trans World Airlines, a critically-important defense contractor, Hollywood’s most pursued, and elusive, bachelor, and partner of the United States government.
This is an epic biography of an epic figure, who bestrode the world like a colossus, yet could not master himself.

Empire: The Life, Legend, and Madness of Howard Hughes

This title is due for release on April 22, 2009
We'll send you an email as soon as it is available!