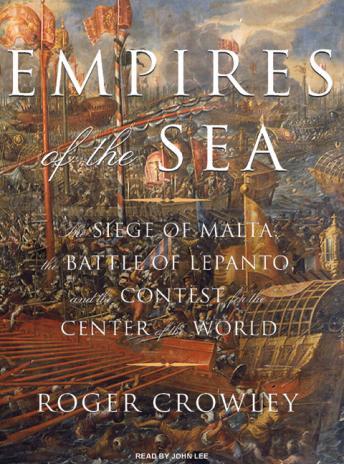 Empires of the Sea: The Siege of Malta, the Battle of Lepanto, and the Contest for the Center of the World

Empires of the Sea tells the story of the fifty-year world war between Islam and Christianity for the Mediterranean: one of the fiercest and most influential contests in European history. It traces events from the appearance on the world stage of Suleiman the Magnificent-the legendary ruler of the Ottoman Empire-through 'the years of devastation' when it seemed possible that Islam might master the whole sea to the final brief flourishing of a united Christendom in 1571.

The core of the story is the six years of bitter and bloody conflict between 1565 and 1571 that witnessed a fight to the finish. It was a tipping point in world civilization, a fast-paced struggle of spiraling intensity that led from the siege of Malta and the battle for Cyprus to the pope's last-gasp attempt to rekindle the spirit of the Crusades and the apocalypse at Lepanto. It features a rich cast of characters: Suleiman the Magnificent, greatest of Ottoman sultans; Hayrettin Barbarossa, the pirate who terrified Europe; the Knights of St. John, last survivors of the medieval crusading spirit; the aged visionary Pope Pius V; and the meteoric, brilliant Christian general, Don John of Austria. It is also a narrative about places: the shores of the Bosphorus, the palaces and shipyards of the Venetian lagoon, the barren rocks of Malta, the islands of Greece, the slave markets of Algiers-and the character of the sea itself with its complex pattern of winds and weather, which provided the conditions and the field of battle. It involves all the peoples who border the Great Sea: Italians, Turks, Greeks, Spaniards, the French and the people of North Africa.

This story is one of extraordinary color and incident, rich in detail, full of surprises, and backed by a wealth of eyewitness accounts. Its denouement, the battle of Lepanto, is a single action of quite shocking impact-considered at the time in Christian Europe to be 'a day to end all days.' It is also a narrative about technology and money. Lepanto was the Mediterranean's Trafalgar, one of the great battles of world history, and a turning point in naval warfare. It was the last and greatest moment in the age of the galleys before sailing ships with broadside guns swept all before them, and it was paid for, on the Christian side, with Inca gold.

The battle for the Mediterranean was instrumental in fixing the boundaries of Christendom and Islam and redirecting the course of empire. After Lepanto, the great powers turned away exhausted from the bitter and fruitless struggle for mastery of the Mediterranean. Henceforth, the contest for empire would be global: its new theaters would be the Atlantic and the Indian Oceans, the spice islands and the Americas.

Empires of the Sea: The Siege of Malta, the Battle of Lepanto, and the Contest for the Center of the World