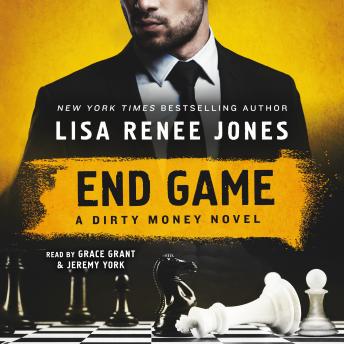 Listeners have been begging for the final installment in Lisa Renee Jones' Dirty Money Series, and now it's finally here! End Game is a steamy, addicting audiobook that listeners won't soon forget.

How deep can you love?

Passion and danger collide in the explosive finale to Emily and Shane's story.

After tragedy strikes, Shane hovers on the edge of being consumed by darkness. He will fight for the woman he loves. He will destroy his enemy. He will not back down. As shocking twists, dark secrets, and explosive betrayals within the Brandon family come to the light, Shane must fight harder than ever before.

Every thread weaves a dangerous web. Emily and Derek. Brandon Senior. Maggie and her affair. The leader of the dangerous cartel who’s wedged itself inside the Brandon Empire. It all comes to a head in the shattering conclusion to the Dirty Money series.

So disappointing! I was left with a cliffhanger on the last book and I was really looking forward to the finale. I did not like how the author decided to end this story. So much doom and gloom, guilt and depression. I mean what is there to like about these characters, really? He is so serious and dramatic. So what of hebis handsome and rich, there is nothing else about him thatvis likeable. The majority of the book was drawn out way too much and then the last part was rushed. Like she got tired of writing and decided to make up some happy(ish) ending to quickly get the book over with.