The End the Free Market: Who Wins the War Between States and Corporations? 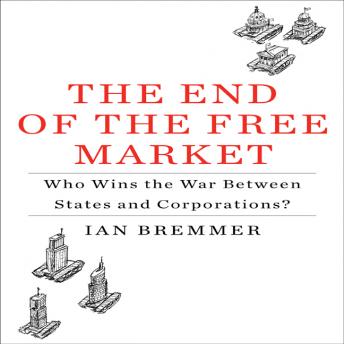 The End of the Free Market details the growing phenomenon of state capitalism, a system in which governments drive local economies through ownership of market-dominant companies and large pools of excess capital, using them for political gain. This trend threatens America's competitive edge and the conduct of free markets everywhere.

An expert on the intersection of economics and politics, Ian Bremmer has followed the rise of state-owned firms in China, Russia, the Arab states of the Persian Gulf, Iran, Venezuela, and elsewhere. He demonstrates the growing challenge that state capitalism will pose for the entire global economy.

Among the questions addressed: Are we on the brink of a new kind of Cold War, one that pits competing economic systems in a battle for dominance? Can free market countries compete with state capitalist powerhouses over relations with countries that have elements of both systems-like India, Brazil, and Mexico? Does state capitalism have staying power?

This guide to the next big global economic trend includes useful insights for investors, business leaders, policymakers, and anyone who wants to understand important emerging changes in international politics and the global economy.

End the Free Market: Who Wins the War Between States and Corporations?