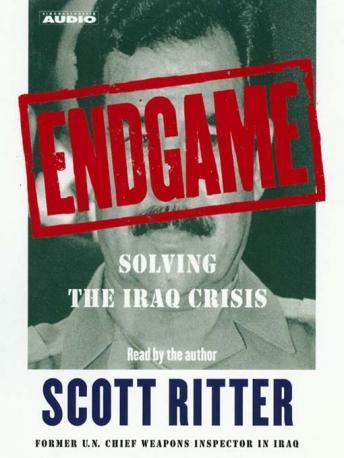 WHAT SHOULD WE DO ABOUT IRAQ?
Scott Ritter spent seven years in Iraq as an arms inspector for the United Nations. His 1998 resignation as the U.N.'s chief weapons inspector there made front-page headlines around the world. In Endgame, Ritter draws on his experiences to take us inside Saddam Hussein's Iraq and to explain where U.S. policy in Iraq went wrong.
Ritter describes in detail the ways that Saddam tried to foil inspectors by concealing his weapons programs. He brings readers with him inside some of Iraq's most carefully guarded sites and shows us dramatic face-offs between U.N. inspectors and hostile Iraqi guards and officials. But Ritter criticizes the U.S. for squandering an international consensus on Iraq and trying to use the inspections process for uniquely American goals. He argues strongly against the proposed American military strike against Iraq, suggesting instead a bold and innovative solution to the long-standing crisis.

This title is due for release on April 1, 1999
We'll send you an email as soon as it is available!