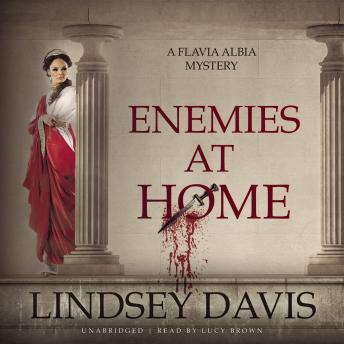 "“There are rules for private informers accepting a new case. Never take on clients who cannot pay you. Never do favors for friends. Don’t work with relatives. If, like me, you are a woman, keep clear of men you find attractive.”

“Will I never learn?”

In ancient Rome, the number of slaves was far greater than that of free citizens. As a result, often the people Romans feared most were the “enemies at home,” the slaves under their own roofs. Because of this, Roman law decreed that if the head of a household was murdered at home, and the culprit wasn’t quickly discovered, his slaves—all of them, guilty or not—were presumed responsible and were put to death … without exception.

When a couple is found dead in their own bedroom and their house burglarized, some of their household slaves know what is about to happen to them. They flee to the Temple of Ceres, which by tradition is respected as a haven for refugees. This is where Flavia Albia comes in. The authorities, under pressure from all sides, need a solution. Albia, a private informer like her father, Marcus Didius Falco, is asked to solve the murders.