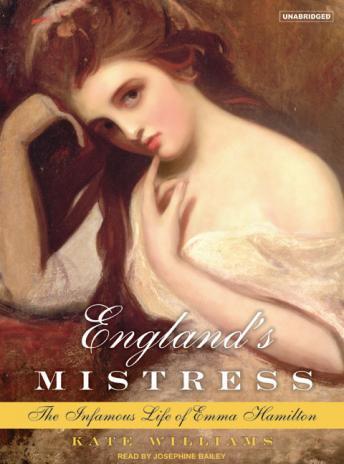 Emma Hamilton was England's first superstar. She fought her way out of dire poverty to become a fashion icon, an Ambassador's wife, a confidante of both Queen Marie Antoinette and the Queen of Naples, and the mistress of Lord Nelson, England's greatest military hero. Drawing on hundreds of previously undiscovered letters, England's Mistress follows Emma's dramatic journey from the slums of Northern England to the Royal Court of Naples, and from the brothels of St. James's to the tragedy and glory of the Napoleonic wars. Muse and mother, wife and mistress, celebrity and villain, victim and survivor: Emma Hamilton was one of the most remarkable women in British history. Emma set out to make herself a star - and she succeeded beyond even her wildest dreams. By her early twenties, she was the most painted woman of her day. Her 'Attitudes', classical postures in diaphanous outfits, thrilled aristocrats and intellectuals while her innovations in fashion and dress changed the way women looked for ever. Shrewdly manipulating the media's fascination with her, Emma made herself into the most famous woman in England, desired by every man she met, adored by thousands, and, for a time, very rich. Yet, she was willing to throw it all away for the man she loved. Extensively researched but told with a novelist's flair, this is the story of one woman's fight to live on her own terms. England's Mistress captures the relentless drive, innovative style and burning passion of a true heroine.