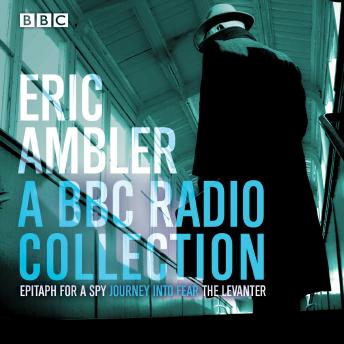 BBC Radio 4 dramatisations of three of Eric Ambler’s bestselling spy thrillers, plus Nick Perry’s play The Battle of San Pietro and a bonus documentary, Ambler at 80

Eric Ambler has been hailed as ‘the father of the modern spy story’. His tense, gritty thrillers introduced a new realism to the classic espionage mystery, and influenced novelists from Graham Greene to John le Carré. This collection brings together three of his best-known novels, adapted for radio with a full cast.

Epitaph for a Spy
When Hungarian language teacher Josef Vadassy goes to collect his photographs from the chemist, he is arrested on suspicion of espionage. The roll of film contained pictures of military installations – but Vadassy knows he didn’t take them. Can he find the real spy and prove his innocence?

Journey into Fear
Istanbul, 1940. Amiable engineer and munitions expert Alec Graham has just concluded high-level arms talks with the Turkish government when someone tries to kill him. Escaping by steamer, he realises that his would-be assassin is also on board…

The Levanter
Michael Howell has kept his family's firm from nationalisation by co-operating with the new Syrian regime. But other political forces are at work in the Middle East – and Howell soon finds himself caught up in a deadly plot. This gripping tale of intrigue and double-dealing won the Crime Writers’ Association Gold Dagger Award.

Among the casts of these fast-paced adaptations are Edward Hogg, Daniel Rigby and Raad Rawi. Also included in this collection are The Battle of San Pietro by Nick Perry, a 45-minute play exploring Eric Ambler’s experiences shooting a wartime propaganda movie alongside John Huston, and the celebratory Radio 4 profile Ambler at 80, in which presenter Michael Barber discusses the author’s life and work.